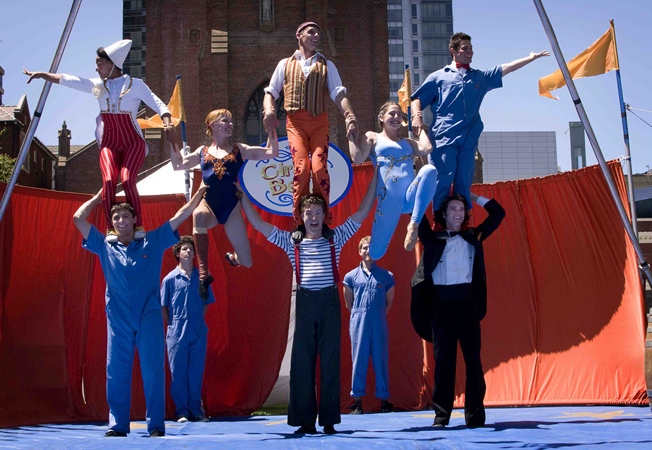 Seriously guys, What an amazing show.

Circus Bella, if you don’t know them, and you really should, is one of the few circuses left still upholding the traditions created by groups like the Pickle Family Circus in the 1960’s and 70’s with the invention of the New American Circus. This was a small one ring circus full of spectacular artists, with no big animal acts, that traveled locally trying to bring joy and investment into the communities they visited. By and large these companies were non-profits and a primary aspect of their performance was community building and community fundraising.

Circus Bella is an amazing series of acts, woven around a gentle familial theme, that presents a core group of performers every year with specialist acts rotating in and out. Ever present are it’s founders and co-directors Abigail Munn and David Hunt, though it was also co-directed this year by Sara Moore of THRILLRIDE MECHANICS.

The clowns, including Jamie Coventry, Juggler and physical comedy, and DeMarcello Funes who does a wonderful ham-bone act using some really lovely fixed point and mime work within it, following a whole cast table sliding act, could have both been used more. Both performers have far more than enough skill to carry a show on their own as a solo clown, and I was left wanting more from them both, especially considering the natural chemistry Ringmaster Kaluza and Clown Coventry exhibit when working off one another, and It has been really great to see DeMarcello grow as a performer over the last few years, and he continues to impress me. It seems a loss not to have had more focus the skills of some very solid comedians.

Ross Travis, whom I most know from his buffoon performances, did a jaw dropping Chinese pole act, and Dworia Galilea proves herself as one of the Bay Area’s greatest physical performers with a gorgeous poetic contortion act.

I am terribly biased, but I consider Natasha Kaluza of Coventry and Kaluza and Ringmaster for Bella’s new production “Here We GO” to be the most talented Hula Hoop performer I have ever seen and never fails to me amaze me with her 50 hoop act, couple with a really spectacular pair of acts by Abby Munn on trapeze and David Hunt on Slackrope, you have at least a handful of acts that could fold easily into any nationally touring circus show. The only complaints I had were regarding some choices regarding costumes that were made, and the clown thing I mentioned earlier.

If you have a chance to catch the show this year, please do. It’s more than worth going out on a sunny day and spending an hour sitting in the sunshine, sucking up high class low brow art by dedicated athletes and comedians.

You can find the schedule for the rest of Circus Bella’s summer tour shows at this link.

Support us on Patreon

We are a tiny empire of artists; clowns, podcasters, and board game designers, and we couldn't do what we do without your support. Please consider pledging your support to our art though our Patreon page.